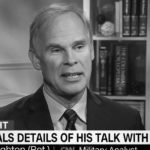 Colonel Cedric Leighton is a Founding Partner of CYFORIX, He specializes in the field of Cyber Risk and advises an international clientele on cyber intelligence, cyber strategies and the deployment of the newest cybersecurity technologies.

Colonel Leighton is also a CNN Military Analyst. In this capacity, he provides on-air commentary on military and international security issues to CNN’s US and international audiences. He has provided his analysis from locations as diverse as Washington, New York, London, Paris and the Middle East. Prior to his appointment at CNN, he appeared on numerous global television and radio networks. He has also been quoted in the New York Times, Wall Street Journal, Los Angeles Times, Le Figaro, Correio Braziliense, and Spain’s La Razon newspaper, as well as in several specialty publications like C4ISR Magazine and ADS Advance. He has written articles for several publications, including The Hill and Leadership Excellence Magazine.

Prior to becoming a Founding Partner of CYFORIX, Colonel Leighton served for 26 years as an Intelligence Officer in the US Air Force. During this period, he deployed five times to the Middle East, served at US Special Operations Command, directed specialized intelligence efforts during combat operations, witnessed the fall of the Berlin Wall, was a Squadron Commander and served twice at the Pentagon. During his second tour at the Pentagon, Colonel Leighton served on the Joint Staff, where he became the Deputy Director for Warfighter Support and Integration within the Intelligence Directorate. His last military assignment was as the Deputy Training Director for the National Security Agency. He founded his consultancy, Cedric Leighton Associates, LLC after retiring from the US Air Force in 2010.